"We are all guardians of history. The best way to preserve history is to make its presentation so interesting and exciting that people will pay a fair price for a great experience."
-Allen C. Harper, Cheif Executive Officer-Chairman. American Heritage Railways

Step onboard for year-round train adventures with both steam and diesel excursions and special dinner trains in the heart of the Great Smoky Mountains. Excursion trains run through scenic mountains and colorful countryside in western North Carolina. A ghostly tunnel, a high breathtaking trestle, a fugitive and an Iron Horse!

Rail Events Inc. is in the business of coordinating licensed special events, event coordination, event promotions, merchandise and related activities to railroad operators throughout the United States and Canada. Rail Events Inc. utilizes railroad industry contacts, using a clear and pre-planned event program guide, successful marketing strategies and customer satisfaction based programs which has made us a leader in railroad event promotions.

Established in 1883 as the Thomson Block, the Grand Imperial Hotel stood as the “Crown Jewel of Silverton”, the largest structure in Colorado outside of Denver. Established alongside the railroad during the mining years of the late 1800’s, the hotel became known for its luxury and stature, a sight to behold in the Colorado Rockies.Resting in the same place for over 135 years, the hotel has changed hands and names over the course of its lifetime. In 2015 the Harper Family, owners of the Durango & Silverton Narrow Gauge Railroad, took on the impressive task of restoring this historical hotel to its previous grandeur. 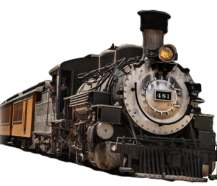